The worst part about having firehair

The worst part about having firehair is that you gotta sleep on a concrete pillow. You also wanna make sure your nightstand isn’t too close. Oh, I can’t tell you how many times a fashionable person has fallen victim to their own firehair! Just by rolling over in a groggy state and setting their own lampshade ablaze. But after a few months you’ll get used to it. You may still char some low ceilings, but in all fairness you should be thanked for gracing those rooms with your brilliant fashion sense, and perhaps they will even cherish the burn mark as I’m sure they cherish you.
Anyone who is anyone has firehair. Haven’t you heard? Haven’’t you seen one of the fashionistas walking down the street without hair, but instead a flame smoldering and dancing on their head? There’s no need for brushes, shampoo, and don’t even think about hairspray! You wanna burn your house down? Of course not! I’m sure it's full of expensive, exotic things. Irreplaceable, like you.
Well if you haven’t heard, for some god-awful reason, let me give you the lowdown. Firehair is the end-all-be-all hairstyle ever. Period. EVER. 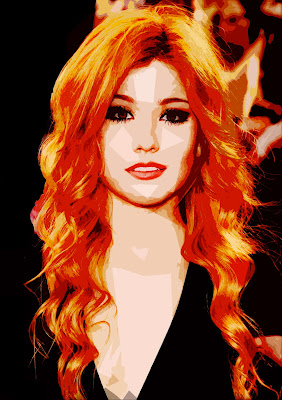 So this is how you do it. First, you gotta know someone. Or at least know someone who knows someone. Or in the very least, know someone who knows someone who is at least friends with someone. You can’t get this in any random salon, kay?
Alright so you gotta know someone, and then you gotta go through with the procedure.
Now don’t bail on me here. It’s not all that painful. Just a few chemical injections and some sub-dermal surgery. Ever get your septum pierced? It’s not much worse than that! Only a few days of recovery and poof! You’re more fabulous than you ever could have imagined. Oh and yea one more thing… it’s irreversible. That’s right, it’s a fire that burns for a lifetime. And make sure you keep it away from water! If that fire fades your head will just be a burnt, bald, utterly sad thing to look at.

I remember the first time I saw it. She was like a Greek goddess. Her lips were as red as the fire on her head. Oh, her face was just the perfect type of round, and when she smiled it seemed like she was directing it in a full 180 degrees. Everyone who could see her face would think, “gee, I think that girl is smiling just for me.” But she would smile for everyone, I’m sure. She must have been one of the first if not the first firehair fashonistas, because at the time even I hadn’t heard of it.
After asking around, because as you know, I have the most connected friends, I found the source of the fire hair movement.
He may have been some creepy little guy in a basement, but I went through with it without a second thought.
And who would of guessed that I became the spear point of the firehair movement? I went to all the good cafes, and burned their ceilings to a good and gentle crisp. I walked down all the busy streets and I went to all the new movies.  I took the complaints as compliments, since they were so clearly jealous. In a few weeks, more and more people had firehair.I sparked a sensation. Yes, I was the kindling to a brilliant new flame. The world was alive with a beautiful fire.

But then SHE turned up. That frost queen.
She showed up with her ‘new’ hairstyle, icehair.
Yea fucking icehair that’s right.
There was no hair upon her head, or a flame wonderfully dancing.
SHE HAD ICEHAIR. Icehair!? Have you ever heard of something so absurd? It was like a crown made of snowflakes. It just seemed so flimsy and brittle. And I’m sure that girl was equally flimsy and brittle.
But there was something about that icehair.
Soon I couldn’t get it out of my mind. I lay in my bed for hours, tossing and turning on my concrete pillow, and though my head burned like a flame, the rest of my body was cold as ice. And if I managed to dream, I dreamed only of her. Icicles fell from the sky and cut me to a million pieces. My firehair dwindled in the damp, cold air of her presence.
Soon reality became even worse than those nightmares as I saw more and more icehair everyday. Even some of my fashionable, dear friends somehow had their firehair frozen into a crystal! Everyone thought it was the ‘new thing’.
But did they think I would give up on it too? The idiots. I helped pioneer firehair! Did they think I would just turn my back on it?

Well, I’ll tell ya what I did, even if you have already heard about it in the news. I’ll tell you my side of the story.
Somehow in the early morning, just as I was having one of those awful dreams about her, some little neighborhood joker set the sprinklers off in my apartment building. The water falling on my firehair was one of the worst pains I have ever felt. The steam and smoke surrounded my face like a scorching mask. I ran to the fire exit and climbed down in a smoldering fury.
I didn’t stick around to wait for the fire department. I didn’t even care about all my burning possessions. My face was a mess and my thoughts were all jumbled up but I knew I had to keep my firehair burning. I kept it safe in the shower for months and never went out when it was raining, and I wasn’t going to let it vanish on me now.
A while back I heard something: that if your firehair is going out, you can give it some life by drinking booze. The alcohol in your blood works like lighter fuel and you might be able to get it to last long enough to get somewhere with the right chemicals.
So I went to the store and bought some vodka and started drinking it as I began my long and difficult journey.
The people on the streets looked at me with sideways eyes, like I was some sort of crazy person!
I kept drinking, praying to the god of fashion that my hair kept burning. Then I started seeing people with icehair. They began looking like ghosts, like fucking ice zombies!
Their chills sent shivers down my spine. I had to keep checking to make sure my fire hadn’t been extinguished. I borrowed a nice man’s newspaper and held it over my head and with great relief I saw that it was still burning. And ok, yea, I may have dropped that newspaper and started a fire or two. AND YES I lit a few more things on fire in my stupor, but come on people, that’s what fire department is for!

Then I realized where I was, right by my favorite café. I saw all my friends. All of them had icehair and they were laughing and having such a great time.
AND THEN I SAW HER.
She was sitting there practically absorbing all their laughter. Somehow radiant even with that crown of frost and her silky blue clothes that seemed to tumble down her body like a snowy tundra.
And they look at me and laughed even harder. They laughed at me?! I mean, im sure I looked awful, and I would have probably laughed at them if they were in my shoes, but how could they laugh at ME?!
I didn’t know what was happening. I thought I was in another of those terrible dreams.
She stood up, and looked as if she was about to leave.
I could feel the warmth on my head. My flame had not yet gone out.
Her and that icehair. IT WAS LIKE A DAGGER IN MY MIND. ICEHAIR ICEHAIR ICEHAIR ICEHAIR ICEHAIR ICEHAIR
“damn you!” I screamed with the agony of a thousand burning souls as I walked towards her.
And that’s when I saw the fear in her eyes. It was like watching a frozen river shatter at sight of first spring.
And you know what I did? Yea that’s right.
I walked right up to her, hugged her like a lost friend, kissed her on the cheek, and smiled with sharp teeth as her stupid icehair melted into little rivers around us.